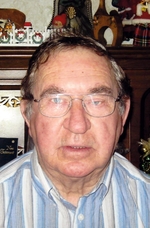 “King Of The Used Cars”

Bev made his last deal at Shelburne Residence on Wednesday, December 18, 2019 in his 88th year. Son of the late Henry and Violet (nee Willis) Matthews. Father of Michelle Matthews (Drew Brooks) and Mike Matthews. Grandfather of Spencer and Ian Matthews both of Collingwood, Eli and Madeline Brooks both of British Columbia. Loving companion of the late Jessie Pilling. Bev will be fondly remembered by Jessie’s children John (deceased), Doug, Melanie and Trent and their families. Predeceased by his brothers Ronald and Gerald Matthews.

A Private family gathering will take place on Sunday, December 22, 2019 and a public celebration of his life will be held at Fiddle Park in the spring. In honour of Bev’s long term dedication to the Kinsmen Club of Canada, donations to Cystic Fibrosis would be appreciated.

All rights reserved. This obituary is also archived at obittree.com