To share your memory on the wall of Dennis Leitch, sign in using one of the following options:

A receipt has been emailed to the address provided. A receipt may also be printed.

Print
A private, family only, graveside service was held at The Community of Christ Cemetery, Proton. A celebration of life will take place at a future date.

Donations are being accepted for:
Dufferin Oaks Shelburne Residence

We encourage you to share your most beloved memories of Dennis here, so that the family and other loved ones can always see it. You can upload cherished photographs, or share your favorite stories, and can even comment on those shared by others.

Posted May 19, 2020 at 04:24pm
Bill and Elaine Healy
We offer our sincere condolences to Lois, Heather & Greg & families. We remember Dennis with a smile, a story and one who loved music. May your memories bring you comfort!
Comment Share
Share via:
TS

Posted May 15, 2020 at 09:06pm
Lois and family. Our sympathies on Dennis’s death. I always enjoyed chatting with Dennis.
Dennis was a very caring and enthusiastic person. Our best wishes.
Terry & Judi Sullivan
Comment Share
Share via:
N

Posted May 15, 2020 at 09:52am
Neil & Grace Cowling.Dennis was a great neighbour and friend. We had a great time lots of laughs on the ground and in the air he had a smile and time for everyone. We sure will miss him. Our condolences go to Lois Heather &Greg.Melanie.Allen Susie & faimily..
Comment Share
Share via:
A

Posted May 14, 2020 at 03:57pm
Bill and Sue Spires. So many things come to mind when we think of Dennis: a wonderful smile; always up for a dance; always sharing his puzzles (we even took some to Africa); the strawberry man; a people lover; so young at heart; such a sharp mind, always able to remember those he met in the past -- those are just a few of the things we admired about him. We will sure miss his visits on his scooter, and Bill already misses him at the cafe. If we miss him, we know you do so much more, so we want to say how sorry we are.
Comment Share
Share via:
JC

Posted May 12, 2020 at 01:36pm
Heather, Greg, and Families
So sorry to read of your fathers passing Heather. He was a kind man - always having time and interest for others, and always with a genuine smile. Dennis and my Mother went to school together and later enjoyed reliving and sharing great memories and stories while at the primrose restaurant - and later, the Shelburne cafe. We wish you strength as your fond memories help guide you through the lonely days ahead. Condolences to your families and loved ones.
Comment Share
Share via: 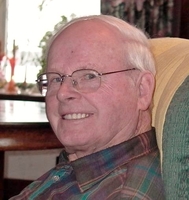