To share your memory on the wall of Gary Corlett, sign in using one of the following options:

A receipt has been emailed to the address provided. A receipt may also be printed.

Donations are being accepted for: Shelburne Public Library.

We encourage you to share your most beloved memories of Gary here, so that the family and other loved ones can always see it. You can upload cherished photographs, or share your favorite stories, and can even comment on those shared by others.

Posted Jan 17, 2021 at 06:23pm
Dear Eleanor (Bryan, Geoff, Peter and Diane) and families
I just learned of Gary's passing today, and my heart goes out to all of you as you deal with sorrow and loss. I am imagining that you have spent many hours recounting memories of a man who taught you about love, learning and life. Gary was an exceptional, highly intelligent person, a gentleman and just a very kind man. He always made a point to stop and chat with me about trees, plants, restoring cars, books, performing Shakespeare, concerns for family members and the many accomplishments of all his children. His passing is a huge tug on the heartstrings. It always hurts. My deepest sympathy.

Posted Jan 17, 2021 at 02:31pm
Dear Bryan, Jackie & Jon we are so sorry to hear of the loss of your beloved Dad/Grandfather , thinking of you at this sad time
The Obituary was beautifully written, what a wonderful life he had and such talents
Hoping that soon the tears will turn into wonderful Memories

Posted Jan 15, 2021 at 02:52pm
Dear Eleanor & family: We were very sorry to learn of Gary's passing. We remember so well when you, Gary & your young family who came faithfully to our farm for apples. At that time, It was urban families, like you, who reminded us how fortunate we were to call Mulmur "home". Gary was highly respected for his part on the Mulmur Mono Ratepayers Association, as well as the Mulmur Committee of Adjustment. Gary always made his presentations with professionalism & a touch of humour. Our Love & Prayers are with all of you at this difficult time. Sincerely, John & Isabel Ireland.
Comment Share
Share via:
KA

Posted Jan 09, 2021 at 06:05pm
Dear Eleanor and family, Gary was a special friend to our parents - Mike and Diane Armstrong and we all remember him very fondly. Please know that we are thinking of you. With our condolences,
Katie, Tony, and Laura Armstrong
Comment Share
Share via: 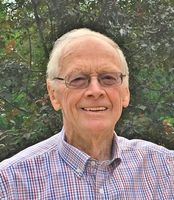